RA-L Appendix View it on Github

In this work, we were interested in investigating the efficacy of Adversarial Imitation Learning (AIL) on manipulation tasks. AIL is a popular form of Inverse Reinforcement Learning (IRL) in which a Discriminator, acting as a reward, and a policy are simultaneously learned using expert data. Empirically, we found that a state-of-the-art off-policy method for AIL1 is unable to effectively solve a variety of manipulation tasks. We demonstrated that this is because AIL is susceptible to deceptive rewards2, where a locally optimal policy sufficiently matches the expert distribution without necessarily solving the task. A simplified example where this occurs is shown below:

A simple MDP where AIL learns a deceptive reward and a suboptimal policy.

AIL learns to exploit the \(a^5\) action without actually completing the full trajectory.

To mitigate this problem, we introduced a scheduled hierarchical modification3 to off-policy AIL in which multiple discriminators, policies, and critics are all learned simultaneously, solving a variety of auxiliary tasks in addition to a main task, while still ultimately attempting to maximize main task performance. We called this method Learning from Guided Play (LfGP), inspired by the play-based learning found in children, as opposed to goal-directed learning. Using expert data, the agent is guided to playfully explore parts of the state and action space that would have been avoided otherwise. The title also refers to the actual collection of this expert data, since the expert is guided by a uniform sampler, in our case, to fully explore an environment through play. This not only significantly improved the performance of AIL with an equivalent amount of expert data, but also allowed for the reuse of auxiliary task models and expert data between main tasks through transfer learning.

An example of DAC’s poor performance is shown on the left side of the video at the top of the page, and the improved exploration exhibited by LfGP is shown on the right. The diagram below is a simplified description of our multitask environment and the different types of play used in our method.

The main components of our system for learning from guided play.

We created a simulated multitask environment which is available for use here, and is automatically installed and used when training using the open-source repository for LfGP.

Here are examples of each of the four main tasks studied in this work:

As stated, we also used simple-to-define auxiliary tasks to assist in learning and allow for the reuse of expert data and learned models:

We compared our method to both multitask and single-task baselines:

Expert dataset sizes for each task, including quantity of auxiliary task data. Each letter under "Dataset Sizes" corresponds to an auxiliary or main task, and bolded letters correspond to datasets that were reused (e.g., Open-Gripper, Stack). Numbers are total number of (s,a) pairs.

Our main performance results are shown below.

Although single-task BC beats LfGP in three out of four tasks, remember that it cannot reuse learned data or learned models. However, this result shows that there is still further work to be done to better understand the differences in performance between AIL and BC, especially since with the exact same data, single-task BC dramatically outperforms DAC in all of our environments.

The results of our simple transfer learning are shown here: 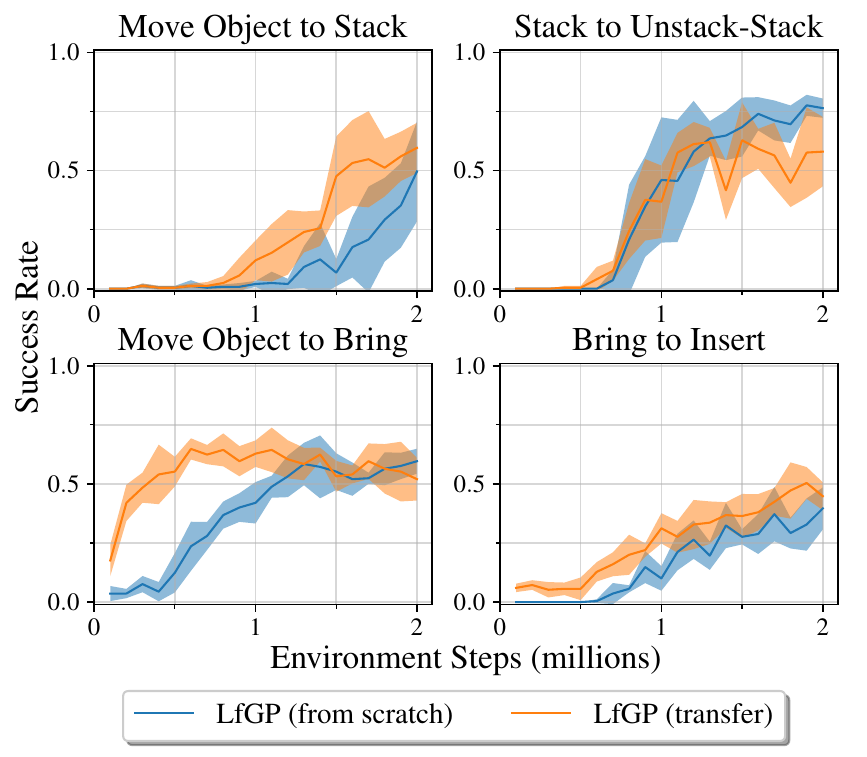 We also visualized the learned stack models for LfGP and DAC.

Again, compared with DAC, the LfGP policies have made significantly more progress towards each of their individual tasks than DAC has, and the LfGP Stack policy, in particular, has already learned to reach and grasp the block, while learning high value for being near either block. Further on in training, it learns to only have high value near the green block after having grasped the blue block; an important step that DAC never achieves.